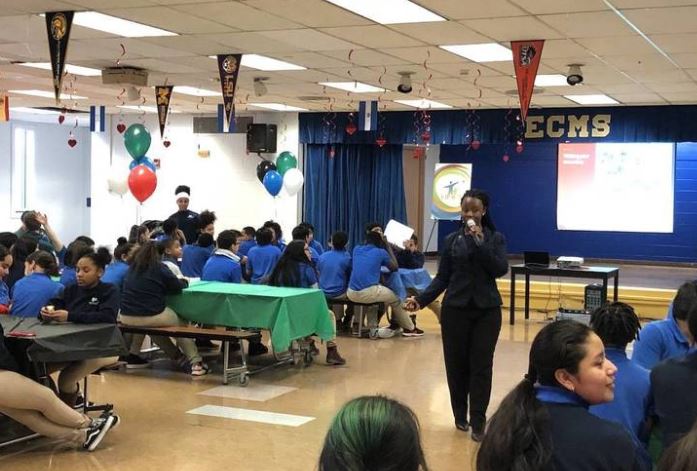 TAP into Camden
by George Woolston

CAMDEN, NJ—As part of its Black History Month celebration, Mastery East Camden Middle School and its chapter of Hispanics Inspiring Student Performance and Achievement [HISPA] invited a Wells Fargo executive to talk to its students about the importance of writing their story.

Crystal Dundas, vice president of corporate communications at Wells Fargo, stopped by the middle school on Thursday to tell students how she went from growing up in Trenton, to graduating from the University of Pennsylvania to a career at one the nation’s largest banks.

“It’s really not just about reading, writing or arithmetic. Giving young people a vision or idea about what they can become, or who they can become, and exposing them to different things — that’s why I’m really excited to be here,” Dundas said prior to the event.

Dundas said that she was also excited to expose the students to the different careers that exist inside certain industries. As the vice president of communications at Wells Fargo, Dundas is charged with telling stories about the bank’s goals, philanthropic initiatives and other successes,  as wells as handling requests and questions from members of the media.

“A lot of times when people think about banking, they think about financial services. But what does it mean to be a storyteller at a bank? So I’m excited about that,” Dundas said.

Dundas was invited to speak by HISPA, a nonprofit organization that connects professionals, to serve as role models in schools and educational programs.

“We identify professionals, primarily Hispanic professionals, to go into middle schools and share their personal stories of success,” said Rodrigo Alejandro Colon, HISPA role model development director. “It’s inspiring [for students] to see and say, ‘Wow, he has my accent, she has my hair, my color. If they can do it, I can do it.’”

Dundas told the students about growing up in Trenton with immigrant parents from Guyana, going to an all-girls high school, and wanting to be a doctor at the University of Pennsylvania before deciding to go the university’s Wharton of School of Business. She also shared with the students her hobbies outside of work.

She then transitioned to tell the students about the importance of telling their story, especially when posting on social media.

“No matter what social media platform you’re on, you’re telling your own story,” Dundas said, using examples from her own Instagram account. “Be extremely careful about how people are perceiving you out in the world.”

Dundas left the students with four pieces of advice for when they tell their own stories: be thoughtful, be confident, be ok with making a mistake and be true to yourself.