TheBestSchools.org has named Sharif El-Mekki, Mastery Charter Shoemaker Campus principal, second prize winner of its Escalante-Gradillas Prize for Best in Education. The organization selected El-Mekki from several outstanding school leaders across the country and will give him $5,000 for his school.

The prize allows TheBestSchools.org to promote the high academic standards of the late Jaime Escalante, the famed calculus teacher profiled in the film Stand and Deliver, and his principal, Henry Gradillas, who now serves as an academic advisor to the organization.

A bullet is not the way most people come into the field of education, but Sharif El-Mekki is not most people.

At a football game in southwest Philadelphia not long after graduation, “I ended up being shot and left for dead,” he says. That personal attack led to the kind of soul searching that changes a life.

“During my recovery, I started thinking, What about that young man caused him to be so angry? How can I help students who are struggling with similar things?”

El-Mekki, whose parents were both dedicated to social justice, thought that following in their path was the answer. But when a job working in a pre-adjudication youth center dead-ended, a more fortuitous one came knocking.

“Right at that time, someone from the Philadelphia school district approached me about a job, recruiting black men to get into education.”

That was twenty-five years ago.

Through an alternative certification program, part of a collaborative effort between the School District of Philadelphia, Concerned Black Men, and Cheyney University, El-Mekki got his opportunity to reach young people, many of whom were left disillusioned, angry, and hopeless due to a cycle of inequities from which there seemed no exit.

“Students kept getting messages of ‘less than’ expectations,” he says. Through ten years of teaching middle school and five more as a principal, countering that message became his goal. When a former educator at Garfield High School—the school where Jaime Escalante’s math classes inspired the film Stand and Deliver—shared Escalante’s drive for high expectations of students, El-Mekki took it to heart. 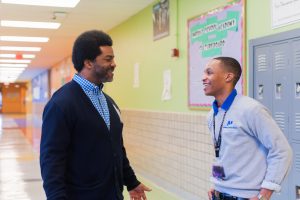 Today, El-Mekki has ten years as the leader of Mastery Charter–Shoemaker Campus, a grade 7–12 charter school in his hometown that champions high expectations and aspirations. It’s how El-Mekki has managed to move this school of 800 students from the bottom ten percent to top thirty percent in school performance rating. Operating from an academic deficit that has entering seventh graders three years behind in reading skills, El-Mekki and his team have helped students overcome through an average gain of a grade level and a half each year.

The result? El-Mekki’s school has achieved a one-hundred percent acceptance rate to college for its students, with eighty percent going on to four-year colleges and universities.

“Because we cultivate a staff mindset that doesn’t allow us, as educators, to make excuses to our students, their families, or the community about what our students can accomplish, we have established Shoemaker as one of the best comprehensive high schools in the city and state, “ El-Mekki says. “While some people balk at the notion of ‘No Excuses,’ we know well that this phrase was initially and rightfully established to send the message about educators who would never make excuses about what poor black and brown children could accomplish.”

It’s that kind of turnaround that caught the attention of TheBestSchools.org.

El-Mekki also believes that despite advice he received as a new principal to “keep my head down,” the key to genuine change is to “advocate and agitate” for it. By maintaining a higher profile, he and the team at Mastery attracted attention nationally for their successes. The US Secretary of Education under President Obama chose El-Mekki for the first Principal Ambassadors program, which helped provide an insider’s expertise on education to the US Department of Education and expanded El-Mekki’s opprtunities to help others principals in similar situations.

“Like many black men, education was not a conversation before I graduated college. After college I knew I wanted to do something around social justice. I knew that for a long time, but I didn’t look at the classroom as the lever to do that, even though my mother was a public school teacher,” El-Mekki says. “Looking backward, I can see how all the seeds for teaching were planted.”

In much the same way that El-Mekki’s own story in education starts with recruiting more black men into education, he continues that narrative through his founding of The Fellowship—Black Male Educators for Social Justice.

El-Mekki offers this closing: “When Richard Wright, one of the most influential black educators in the 1870s, was a student in Atlanta, he was asked…about freedmen, ‘What should we tell people about your schooling?’ His response has become legendary: ‘Tell them we are rising.’”

For the students at Mastery Charter’s Shoemaker Campus, its staff, and their outstanding principal, that rising is clear to all.

This story originally appeared on thebestschools.org.