Welcome to Mastery Prep Elementary, a free, public charter school in North Philadelphia. We offer children academic excellence in a fun, joyful environment. From math to music and reading to field trips, our students receive a well-rounded education from loving teachers and leaders.

We currently offer grades K-4 and will introduce grade 5 in the 2021-22 school year. We will continue to expand yearly until we become a K-6 school.

What is the name of the after care company?

Mastery Prep Elementary partners with “Change 4A Dollar” after care program. We believe that this organization would be the best match for our school. “Change 4A Dollar” operates each school day from dismissal until 6 p.m.  All students in grades K-4 are eligible to join.

What is the school’s uniform?

Where can I purchase the school uniform?

Will uniform shirts be available to purchase at the school?

In order to ensure that our front desk is most efficient to serve your family and our school’s needs, uniforms will not be sold at the school.

Will all students be eligible for school lunch?

All students attending Mastery Prep Elementary are eligible to receive free breakfast and lunch. Please be sure to complete the “Household Income Survey” to ensure that we are able to continue to make these meals available to all students.

When will I receive school bus information?

We are working with the school district to provide school bus transportation to all eligible students. We will send this information via email and postal service as soon as we have the details.

Any student living in Philadelphia is eligible to apply for the lottery at Mastery Prep Elementary, however, preference is given to students living in the 19140 zip code.

For additional questions please reach out to Assistant Principal Sonya Edmonds at sonya.edmonds@masterycharter.org.

Fun morning meetings get students excited and ready to learn

We support the whole child 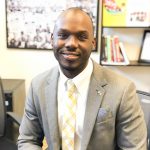 Raymond Fields is the founding principal of Mastery Prep Elementary School. He also served as the founding principal of Simon Gratz  Prep Middle from 2013-2018. Under his leadership, Prep Middle achieved double-digit gains for two consecutive years on the English Language Arts section of the PSSA. The school also received the Schools To Learn From Award from Teach For America Philadelphia for Excellence in Culturally Relevant Pedagogy.

An accomplished school leader, Principal Fields was a 2018 Neubauer Fellow in Educational Leadership and was part of the 2011 New Leaders for New Schools Leadership Program.

He started his education career in 2005 through Teach for America, teaching in Atlanta for five years. He holds a Bachelor of Arts degree in African American Studies & Criminal Justice from the University of Maryland, College Park and  Master of Arts in Teaching from Mercer University.

Feel free to email him any time! Raymond.Fields@masterycharter.org

Mastery Board of Trustees Schedule

"I just love the communication between
the parents and the teachers and the school."