Resources from MHSC during COVID-19

Welcome to Mastery High School of Camden, home of the Warriors! We serve students in grades 9-12 and will graduate our first senior class in June 2020.

With AP classes and dual enrollment, our students can earn college credit while they are still in high school. They can also explore various careers through our internship and automotive tech programs, get one-on-one coaching from college & career advisors and help to prepare for the ACT.

Opportunities? We’ve got them! From sports and robotics to international travel and music, students have tons to choose from.

Check out the video below to learn more. 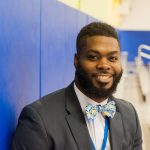 Prior to joining Mastery, he was a turnaround principal at Franklin D. Roosevelt Academy Pre-K-8 in Cleveland, Ohio. Dr. Hayes spent his early career as a high school teacher and administrator in Boston Public Schools.

Dr. Hayes is a native of small-town Hartsville, South Carolina and hopes to be a voice and advocate for change in public education. During his high school years, he was in the marching band, played football, ran track and sang in his school choir.