Your Community School in Southwest Philadelphia

We are one of just a few schools in Philadelphia with a STEM Honors program that starts in 7th grade. All of our sophomores participate in an internship program to explore different careers. And our upperclassmen can take AP classes and participate in a dual enrollment program to earn college credits while they are still in high school.

Students have access to tons of sports and extracurricular activities including band, football, track & field and eSports.

At Hardy Williams, we believe all students have greatness within. With love and high expectations, we support them in finding their own paths to success.

Learn more about our STEM program

Our academically rigorous program prepares students for success after graduation

Lenfest students have tons of sports, clubs and extracurricular activities to choose from, including:

We’re a member of the PIAA (Pennsylvania Interscholastic Athletic Association) within the District XII Public League. Our middle school teams play in a variety of leagues across the city.

For more information or to get a tour of the STEM Honors program, click here.

Any student living in Philadelphia is eligible to apply for the lottery at Hardy Williams Academy, however preference is given to current students at Harrity Elementary. 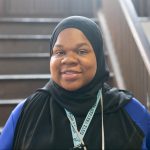 Naeemah Seward is the proud principal of Hardy Williams High located in Southwest Philadelphia. She started her career teaching computer science in 2004 and later taught high school math. After teaching at Mastery’s Shoemaker campus for three years, Ms. Seward moved on to become an assistant principal of instruction at Hardy Williams High for three years, focusing on Math and Science.

Ms. Seward is a native of Philadelphia. She earned her Bachelor of Science at Temple University where she dual-majored in mathematics and computer science and minored in French. She completed her teaching certificate at Drexel University and also earned her master’s degree in Curriculum & Instruction at the University of Scranton.

Some of Mrs. Seward’s goals include creating a rich academic and extracurricular culture at Hardy as well as working with students and families to create even more opportunities both inside and outside of the school community.

"There's a charter school called Mastery in Philadelphia. And in just two years, three of the schools that Mastery has taken over have seen reading and math levels nearly double - in some cases, triple...Now, if a school like Mastery can do it, every troubled school can do it."