Your Community School in Southwest Philadelphia

Hardy Williams Elementary is a citywide charter elementary school serving 600 students and their families in Kindergarten through 6th grade. Hardy Williams is a special place where your child will experience the joy of learning in a safe, positive environment. We focus on 5 core values: respect, responsibility, hard work, teamwork and kindness.  Students who attend Hardy Williams Elementary have the opportunity to automatically attend our Hardy Williams High Campus for 7th – 12th grade, thus giving them a full K-12 Mastery experience.  From music to art to field trips-Our students take part in a well-rounded education.  We work closely with our families to ensure Hardy Williams is a place where every child loves to learn.

Learn more about our K-12 Approach.

Hardy Williams Elementary offers a variety of after school activities and clubs.  Aftercare is available at the school.

Any student living in Philadelphia is eligible to apply for the lottery at Hardy Williams Elementary.  The deadline to apply to be included in the lottery is January 27, 2020. If you apply after the deadline, you will be added to our waitlist. The lottery will be held on February 12, 2020. 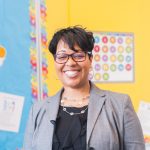 Ms. Jackson has served as principal of Mastery Hardy Williams Elementary since 2019. She has a broad breadth of experience and has served in leadership position in grades K-12 in both traditional district and charter schools in Pennsylvania and New Jersey.

Prior to joining Hardy Williams, Ms. Jackson worked as the founding principal of Mastery McGraw Elementary School in Camden. Under her leadership, McGraw increased their math achievement by 600% and reading by almost 300%. She also served as the founding principal of Mastery Charter Simon Gratz High School, Mastery’s only turnaround high school in Philadelphia, and director of strategic partnerships working with the Gates Foundation.

Ms. Jackson is a graduate of Glassboro State College and received her Master’s degree from Rowan University. Ms. Jackson is the proud mother of three wonderful children and considers herself a ‘Jersey Girl’ born and raised!

"I just love the communication between the parents and the teachers and the school."
-Yonita Martin, Mastery Parent