Your Neighborhood School in Cramer Hill

Cramer Hill is a neighborhood elementary school serving close to 700 students and their families in kindergarten through 8th grade. We are in the top ten schools in Camden for both math and English Language Arts proficiency (grades 3-8). Our students also exceed national trends in growth for both math and reading.

Our state-of-the-art building has a gym, playground, soccer field, library and science labs. Students get free breakfast and lunch. We also have an aftercare program.

At Cramer Hill, we believe all of our students have greatness within. With love and high expectations, we support them in finding their own paths to success.

Learn more about our K-12 Approach.

We offer a free aftercare program and a variety of after school activities and clubs, including:

Meredith Howell-Turner is the founding principal of Cramer Hill Lower. She loves Cramer Hill because of the wonderful children and families. She is proud to balance an academically rigorous curriculum with a fun and joyful school environment.

Principal Howell-Turner started her educational career as an assistant principal with the Camden City School District in 2005 and has taught and led at several Mastery schools in Philadelphia, including Mann and Pastorius-Richardson Elementary Schools.

She received her B.A in History from Yale University, her Masters in School Leadership from The University of Pennsylvania and her Principal Certification from Relay Graduate School of Education, where she joined the first cohort of the National Principal Academy.

Principal Howell-Turner has deep roots in Camden. Her grandfather was born and raised in Camden and was a graduate of Woodrow Wilson High School. She and her husband are the proud parents of two girls. In her free time, she roots for the Eagles! 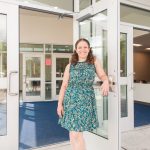 Jessie Gismondi is the founding principal for Cramer Hill Upper. Before joining the Cramer Hill team, she was the assistant principal of instruction at North Camden Elementary (which merged with Cramer Hill in 2017), and a teacher at Mastery’s Mann Elementary in Philadelphia. She is a passionate leader who is looking to inspire her students and staff with joy and positive energy!

Principal Gismondi received her Master’s degree in Educational Leadership from St. Joe’s University in Philadelphia and earned her undergraduate degree from Duquesne University in Pittsburgh.

She loves working in Camden and has grown to love the community and the relationships she has built there. As a Philadelphia native, she enjoys being able to work so close to home.

I've been a Mastery parent for three years and I can say with confidence that I've had an overall great experience. I love the rigorous curriculum, how welcoming the staff is and how accessible the principals are.
- D. Walker, parent